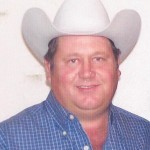 Services will be held on Tuesday, January 22, 2019 at 2:00 p.m. at the First Baptist Church with Loyd Daniel officiating. Burial will be in the Masonic Cemetery under the direction of Archer Funeral Home.

Britt was born April 27, 1964 in Amarillo to Bill and Sandra Hudgens Hagerman. He began working as a cowboy for the WT Waggoner Ranch at the age of 15 and worked there most of his life. He also spent some time working on ranches in the Texas Panhandle and New Mexico before moving to Seymour in 2009. Britt married Sandy Daniel on May 6, 1983 on the Waggoner Ranch. He was preceded in death by his parents, Bill and Sandra Hagerman.

He is survived by his wife, Sandy Hagerman of Seymour; 2 daughters, Angela and Travis Welch of Harrold and Brittany and Colt Ellis of Colorado City; a brother, Brad and Lori Hagerman and 4 grandchildren, Lilly, Sawyer, Meskete and Saige.